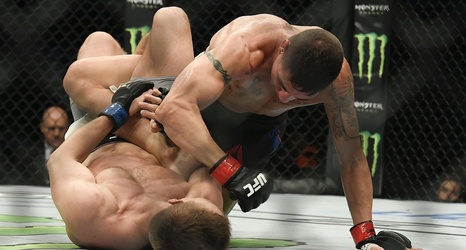 OK, I predicted a first-round TKO of El Cuycuy and was horribly, horribly wrong. Not only did Ferguson respond well to RDA’s pressure, his excellent control of the distance game allowed him to pick the former champ apart, he even threw in a few salsa lessons for good measure. Ferguson has primed himself for a title shot. It will be interesting to see the result of next week’s Lightweight matchup between Khabib and Michael Johnson as the winner could very well be Ferguson’s next logical opponent in the interim. The Lightweight title picture can prove to become increasingly difficult if the unthinkable happens and Mystic Mac shows up to wow us with his wizardry and take the Lightweight title away from Eddie Alvarez. One thing at a time, but in terms of what’s next for Ferguson – look for Khabib to come out victorious at UFC 205 and likely match up with El Cuycuy for a number one contender match.

There were a lot of questions leading up to this fight concerning Sanchez and his ability to still compete at this level after such a lengthy, damaging career. His last defeat at the hands of Joe Lauzon in particular was the first-time Sanchez was stopped due to strikes and had us wondering if the ‘Nightmare’ could still do what we tune in to watch him do – take a lot of damage, throw wild punches, and turn every fight into a dog fight. Well, on Saturday that is exactly what we got. I’d like to add that the RingOdds picks for this event had correctly picked Sanchez to win via unanimous decision. Sanchez showed up that he can still dig deep and keep up with some of these young guns coming up. Look for Sanchez to build off this win and set himself up for another fan friendly barn burner with a Ross Pearson or Paul Felder type fighter.

Dariush’s lackluster victory over Rashid Magomedov reinforced what we already knew about the Iranian – he is ready for a top-10 fight. Many forget that Dariush holds a victory over top 10 Lightweight Michael Johnson who is currently scheduled to fight Khabib Nurbagomedov this Saturday at UFC 205. With his loss to Michael Chiesa now fully behind in following 2 straight victories, look for Dariush to take a step up in competition and challenge. Edson Barboza could be an interesting matchup as he is not currently scheduled to fight. Another option could be Francisco Trinaldo who is on an incredible string of victories and is an admirable foe to anyone in the top 15.