Was It Really Inactivity That Made The Axe Man Quit? 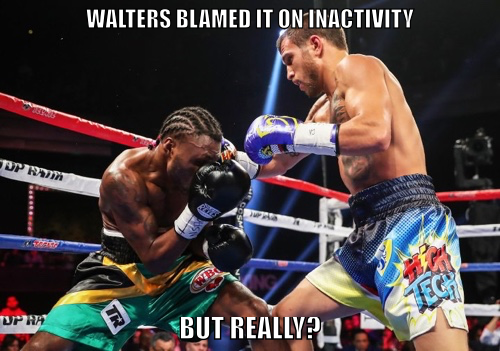 Vasyl Lomachenko vs Nicholas Walters was supposed to be one of the biggest fights of the year. And since it followed the controversial but competitive Kovalev-Ward Light Heavyweight title showdown, it had its lofty expectations. Unfortunately, it ended in the manner a very few expected.

Remember Roberto Duran against Sugar Ray Leonard on November 25, 1980? The legendary Panamanian slugger inexplicably quit with 16 seconds to go in the eight round of his rematch with Leonard. “NO MAS” was thus born, although Duran now denies saying those exact words to anybody in that ring.

Thirty six years later, same month and one day apart ( November 26, 2016 ),  Nicholas Walters refused to fight on after seven rounds of his WBO Super Featherweight title bout with Vasyl Lomachenko. Although Walters was a big underdog in the oddsmakers books at +475, several camps were giving him a shot to upend Lomachenko, especially with his punching power and toughness.

.@AxeManWalters has won 10 of his last 14 fights by knockout. He looks to do the same on 11/26. #LomachenkoWalters pic.twitter.com/b4hxElL558

Coming to the fight, Nicholas Walters had a reputation as one of the sport’s most feared punchers. The proud Jamaican warriors was unbeaten in 27 fights and had knocked out 21 opponents in 26 total wins. Known as the Axe Man for chopping down his opponents, Walters had knocked out 10 of his last 14 opponents.

While Lomachenko had a legendary amateur reputation, he had never faced an elite puncher in six professional bouts. Walters was to provide his his biggest test. As for Walters, he had faced an excellent technical boxer in Donaire and his power prevailed over Donaire’s skills. Knockout artist versus highly skilled ring tactician. This was a battle of styles and it was supposed to be a classic.

In June, @vasyllomachenko won the WBO Jr. Lightweight title. Now he looks to defend it on 11/26. #LomachenkoWalters pic.twitter.com/1jOL29iBrv

So what happened to Nicholas Walters ?

Walters blamed inactivity for his defeat. The Axe Man hadn’t fought since getting ‘robbed’ of a victory against Jason Sosa in December 2015. He and Loma were supposed to fight earlier this year but Walters priced himself out of that bout. Lomachenko took a June 11 fight with Rocky Martinez and won his second world title.

But more than ring rust, it was ‘hi-tech’ that did it. Lomachenko’s footwork and movement were too good, they negated Walters’ power and length. Sure, Loma never faced a puncher like Walters, but Walters had never seen someone as technically good as Lomachenko. During the fight, Walters didn’t look like he was taking in serious damage ( except perhaps in Round 7 ). But if you take a look at the punch statistics, Lomachenko was annhilating Nicholas Walters round after round.

Compubox numbers ( taken from its mobile app Throwdown Scoring ) showed that Lomachenko at least doubled Walters punch output. Despite Walters having an eight inch reach advantage, Lomachenko out jabbed him 36-15. And despite Walters being the heavier puncher, Lomachenko outgunned him 78-34 in power punches.

Lomachenko was below his average of 37.9% connect percentage at 26.1% last Saturday night. But he made Walters miss a lot, allowing the Axe Man to connect on just 18.6% of his total punches. Coming to the fight, Walters averaged 7.7 jabs and 21.6 total punches landed per round. He only landed a total of 15 jabs and 59 total punches in seven rounds against Vasyl Lomachenko. Loma’s domination was on full display in the 7th when he outlanded Walters 30-5 in total punches.

Lomachenko is so good most of his fights look like mismatches. #LomachenkoWalters #lomachenko https://t.co/vlNdMyyBmL

Before the bout, Top Rank’s Bob Arum compared Lomachenko to Muhammad Ali. Well, that sounded self serving, considering old Bob promoted Loma. We often talk about Lomachenko’s 396-1 amateur record and him winning both the World Championships and Olympics on consecutive occassions but didn’t he lose to Orlando Salido in his second pro bout?

However, the victory over Nicholas Walters only proves Lomachenko is the real deal, worthy of pound for pound recognition. Loma is so good, he made Walters looks so bad. Lomachenko made the fight appear like a seven round mismatch. Sure, Nicholas Walters can blame inactivity for his defeat. But as they say, ring rust is but a mental weakness and exists only if you don’t train hard enough.