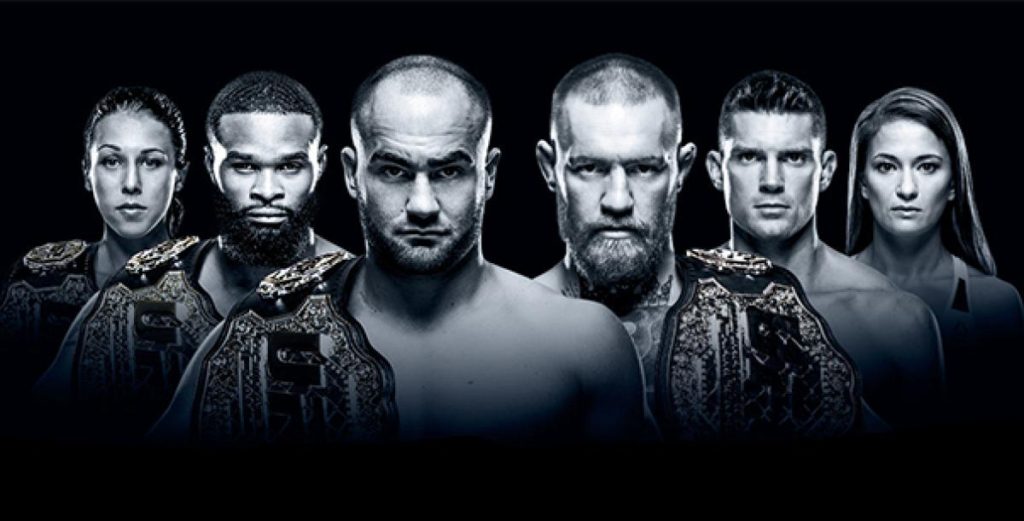 It’s finally here! A much anticipated debut for the UFC in the state of New York brings to us one of (if not the) best cards in UFC history. Here is the RingOdds fight prediction and analysis.

Note: Donald Cerrone vs. Kelvin Gastelum has been removed from the card due to Gastelum missing weight by a reported 10+ pounds (Gastelum did not attempt to make weight, he informed the UFC prior to the morning weigh-ins). 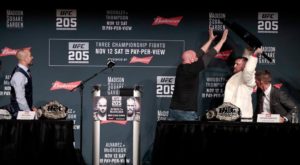 Conor Mcgregor looks to become the first man to hold 2 titles simultaneously in UFC history. In front of him is a man in Eddie Alvarez who holds a tremendous amount of championship level experience. Some may say that this fight comes down to 2 questions – Will Eddie Alvarez be able to take down Conor Mcgregor, and if so, what will happen at that point? This is not the first time Mystic Mac has faced a fighter of Alvarez’s skillset. His fight against Chad Mendes showed us that while Conor’s takedown defense may be suspect, he does possess great scrambling ability to allow himself to get back to the feet.

Make no mistake, Alvarez is no Chad Mendes. He is a strong boxer, exceptional in the clinch, and more importantly – has absolutely 0 quit in him. While I think the key to this fight for Eddie will be to take Mcgregor out of his element which would hands down be the striking department. What do I think will actually be Eddies gameplan? I feel that Eddie will try and turn this into a backyard brawl and hope that the pressure combined with mixing in a takedown will be enough to test Conor’s suspect cardio and perhaps leave an opening for the finish.

Conor will try and do what he always does and that is keep constant forward pressure combined with precise pinpoint striking to fluster his opponents attack. If Gilbert Melendez was able to land on the Underground King then it is more then likely Mcgregor will find similar success.

This one may go 5 rounds given Alvarez’ incredible endurance and durability, but I think at the end of the day this show was set up for Conor to win. It is simply not a good match up for Alvarez and I feel that Conor will inevitably land more shots then Eddie does leaving him ahead of the judges scorecards for a unanimous decision victory. 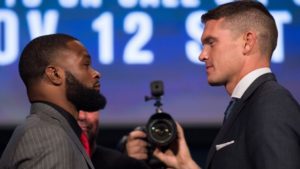 I remember the days of the Welterweight division when GSP ran the show. Every time there was a title defense you knew exactly what would happen. Fast forward to today and we have the man coming off the fastest championship victory in welterweight history against arguably the best striker in MMA today.

The question in this fight will be familiar one for Wonderboy. Can Stephen Thompson 1) avoid Woodley’s takedown and 2) use his footwork and quickness to avoid the heavy hands of the Champ. It is clear who has the striking and grappling advantage in this fight. Thompson possess’ a style in which we have never seen before on the feet. He is able to neutralize his opponents completely and ultimately outpoint just about anyone he goes up against as was the case in his most recent #1 contender match versus Rory Mcdonald. If he can move his feet enough, he may be able to catch a charging Woodley as he’s coming in. He will need to ensure he does not get caught with his back against the cage leaving him susceptible to the takedown, as we all know the chosen on extensive wrestling pedigree.

Tyrone showed us in his last fight what we already know – he can KO anybody in his division with the kind of power he possess’s. This is particularly true within the first round of a fight. While I feel that Thompson’s length and exceptional footwork will be his key to victory, Tyrone possess’s 2 avenues to victory. He will either catch Thompson early and end the fight, or, he will manage to get Thompson down and control him in hopes of landing some ground and pound. Both routes are of equal difficulty.

I feel Thompson is the better striker and has the tools necessary to neutralize a heavy handed Tyrone Woodley. We already know Thompson can go five rounds and look fresh, the “Chosen One” on the other hand has been labeled as a fighter who fades the deeper you get into the fight. This can largely be attributed to his style of fighting which involves a lot of heavy punches which is opposite to Thompson who has more of a point fighting striking style given his Karate background. The biggest difference being that Thompson does not “look” for the knockout but rather allow it to happen organically. I do think that Stephen Thompson will finish Tyrone in the 3rd round following an exhausted Woodley who I feel will start hunting for the take down after failing on the feet.