Kovalev-Ward: The Debate Goes On 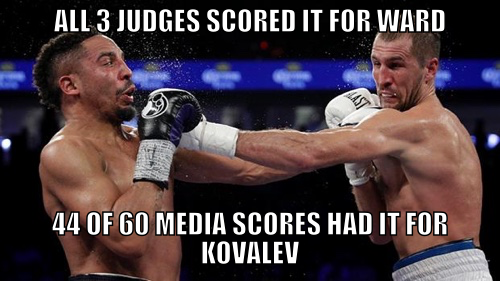 We knew it was going to be s good one. But perhaps we didn’t know it was going to be that close to end in some kind of controversy. That, in a nuthselll, was what happened to the Light heavyweight title showdown between Sergey Kovalev and Andre Ward last weekend.

Despite suffering a second round knockdown, Andre Ward won a close unanimous decision and he did so with identical scores from all thre judges.

Before the fight happened, the popular school of thought was Kovalev by KO and Ward by decision. Kovalev is the naturally bigger man and the heavier puncher. He is known as the Krusher for crushing his opponents. Ward is known as one of the sport’s finest tacticians. His boxing skillset and IQ may be one of the best in his era.

But Ward tried to fight fire with fire early and that nearly backfired as he got clipped by the bigger Kovalev in Round 2. It was only the second knockdown of Ward’s career. But like in so many instances before, not just in the pros, Andre Ward fought back like a true champion and found a way to win, whatever the was.

After scoring the knockdown, Kovalev grew in confidence while Ward appeared to realize that he may be sharing the ring with the wrong opponent. Kovalev dominated the first half of the bout, landing 52 total punches as compared to Ward’s 36. Not only did he outland Ward but Kovalev landed the more noticeable blows. Ward looked like he was in trouble. But Andre did not panic. He recovered and he rallied his way back to the fight.

While Kovalev out-landed Ward 126-116 in total punches, Compubox stats said Ward connected more punches, 80-74, in the final six rounds of the bout.  Kovalev also threw more punches 474-338 but Ward was the more accurate punches at 34% versus 27%. Ward’s late surge and punch accuracy caught the judges attention more than anything else. They had Ward wining 114-113 across all scorecards.

What the Media People Saw

here is 60 press scores i collected for talking boxing , 73% of media scored for Kovalev https://t.co/PVYZtGLRXr

After the bout, Bobby Hunter of @thefightscore compiled 60 press scores for a media outlet. 44 press scorecards had Sergey Kovalev winning the bout. The most popular score was 115-112 for Kovalev and a total of 20 had that score. Interestingly, 23 press people scored the bout 114-113. However, 9 of 13 scored 114-113 in favor of Sergey Kovalev.

Of the 44 scorecards that had Kovalev winning, 30 of them had the Krusher with at least a score of 115. Only 6 had Ward scoring 115 or more. What does these mean? Generally, a 115 score means winning seven rounds to five. The fight was close, too close to call really. It came down to what you wanted to value: Kovalev’s aggression and harder punches or Ward’s resilience and more accurate punching. While the judges saw the latter, the press folks believed in the former.

What The Fans Thought

@ThaBoxingVoice What was your score? Fans at the @Throwdownscore app had it as a draw! #KovalevWard pic.twitter.com/JoKkzFrkOa

Although not the official Fan scorecard, Compubox’s Live Fight Scoring App scored the fight as a draw. If you take a look at their scorecards closely, these fans scored the final round 10-10. Had they given the 12th round to Ward, just as the three judges did, then they would have Ward winning the fight 114-113 too. Take out Round 12 and these fans had Ward winning 6 rounds to 5. With the 10-8 2nd round though, it would still have been a draw.

Of course, these weren’t just the only set of boxing fans who watched or scored ( in their own way ) the #KovalevWard bout. Kovalev fans felt that Krusher scored enough to win and that Ward tried to wrestle his way back in the fight. Ward’s supporters say their man showed the heart of a true champion. Ward hasn’t lost a bout since he was 12 and he showed why on Saturday night. And so on. And so forth. Again, the bout was really that close and that it could have really gone either way.

The only way to settle a controversy like this is to run it back again. There were calls for a rematch immediately after the verdict was read and rightfully so. On Monday, Kovalev and his management team officially sent Ward’s Roc Nation a letter informing them that they have exercised their option for an immediate rematch.

Making #KovalevWard was a little tricky. But forging the rematch shouldn’t be as difficult. So if things go well for both camps, then the two fighters could likely end up facing each other again sometime in May or June 2017. Kovalev said he’d kick Ward’s ass in a rematch. Ward believes he’s got Kovalev all figured out. The first bout was good, the rematch should be better.