Is Pacquiao vs Lomachenko A Possibility? 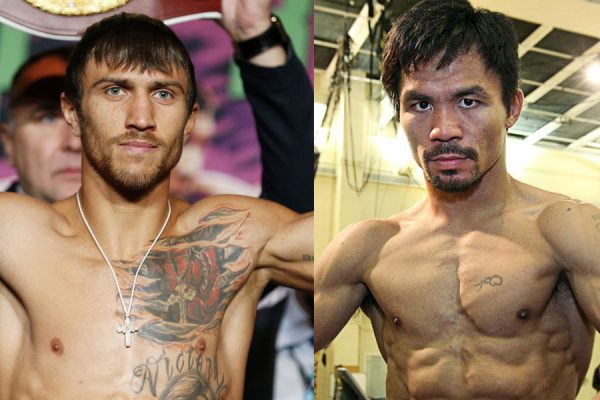 It does sound absurd at first thought but people are actually talking of a possible Manny Pacquiao vs Vasyl Lomachenko bout in 2017.

It’s Pacquiao’s promoter Bob Arum who’s been trying to sell this match-up lately and just a week after he claimed he might match up Pacman with Gennady Golovkin next. The GGG bout was a joke, Arum later clarified. But is he for real with matching Pacquiao with Lomachenko?
Said Arum:

“Terence Crawford is a possibility [for Pacquiao], as is Vasyl Lomachenko, because that’s a fight I want to see more than any other fight that’s out there. No, Manny isn’t 147. Manny fights 135 and 140. No, it won’t be an issue [for Pacquiao to fight Lomachenko], guarantee. That’s the least of the problems.”

Pacquiao wanting it could be a problem. That’s because Arum says it’s Pacquiao who decides on his next opponent. Arum just gives Manny the options. At least that’s what the old man says. Added Arum:

“People don’t believe it. I give Manny Pacquiao the options, and he picks the opponent.”

So if Pacquiao fights again, will he consider fighting Lomachenko?

Of course we’ve seen Pacquiao change his mind before, in fact we saw him do so not so long ago. He announced his retirement from boxing after impressively beating Timothy Bradley last April. He ran for public office in the Philippines and won a senatorial post in his country’s elections last May. A couple of months later, he announced that he was fighting Vargas on November 5.

Having said that, an impressive win over Vargas may lure Pacquiao to fight at least one more time. But is Pacman willing to fight Lomachaneko?

When interviews recently by FightHype, Pacquiao boldy said he could still make 135 easily:

Whether he’d be willing to drop to 135 to fight Vasyl Lomachenko is another issue though. Pacquiao’s trainer, Freddie Roach likes the idea of pitting his longtime ward against the Ukrainian sensation. Said Roach:

“He can make 135. I’d rather have him fight at 140. I haven’t thought of that fight [Pacquiao vs. Lomachenko] yet, because the weights are so far apart. I’d love that fight. I’d accept that in a minute. Lomachenko, sure, I don’t think he’s that good. He’s a good fighter, yes, but I’ve seen him look terrible in fights when he first came over here. I’ve seen him training in my gym for his first two fights, and he played more with tennis balls than anything. He’s going to need more than tennis balls to beat Manny Pacquiao.”

Lomachenko isn’t playing with tennis balls these days. After losing to Orlando Salido in his second professional bout, the two time Olympic gold medalist has racked up five straight victories and has knocked out his last three opponents. Not to mention that he’s won two world titles in two weight classes along the way. If Lomachenko gets by Walters later this month, then he is definitely the real deal. Someone very different from the guy who played with tennis balls in Freddie Roach’s gym.

Of course, there are other big fights that await Lomachenko should he beat the Axe Man on November 26. There is of course the highly demanded showdown between him and Guillermo Rigondeaux. Or a 135 pound showdown with Mikey Garcia. Or even a 140 pound mega bout with Terence Crawford. The possibilities are limitless for Loma. But a fight with a legend like Manny Pacquiao would be once in a lifetime.

What does Loma think of all the Pacquiao talk?

Lomachenko and Pacquiao are both 5-6 in height. Manny may be a little longer at 67 inches in reach as compared to Lomachenko’s 65 inches but the only noticeable physical difference between the two is weight class. During the EsNews interview, Loma was even talking about fighting a 135 pounds Pacquiao when he said he needed a year to prepare. You can’t argue with the guy because nobody knows his body more than he does but what he means perhaps is let Manny slow down by another year perhaps. Look, Lomachenko is a tough guy who’s willing to fight anybody. But Pacquiao, even at 37, may be a handful for him at this point of their careers. Even then, Loma doesn’t realize that fighting Pacquiao is a huge opportunity for him. Like the one Pacquiao had when Oscar De La Hoya was offered to him. Only difference is Pacquiao is more active now than De La Hoya was.

Where does this leave us then?

Let Manny Pacquiao take care of business on November 5. Let’s wait for Vasyl Lomachenko to do his part on November 26. If both win, then let Manny Pacquiao decide if he wants to fight again. If he does, we’d like to see Pacquiao fight Terence Crawford or the winner of Keith Thurman vs Danny Garcia next. That would be more logical. As for Lomachenko, we mentioned the names of Rigondeaux, Garcia or Crawford afterwards. As for the Pacquiao vs Lomachenko match-up? Well don’t count out Bob Arum yet.

Bob Arum doesn’t want to share the spoils. He wants to keep the big fights and the big bounty within Top Rank. That’s why if Pacquiao fights again, he’ll likely offer him Crawford and Lomachenko next. Both are a win-win situation for Arum. A win by either Bud or Loma would be a proverbial changing of the guard. And since both are Top Rank fighters, Arum would have the next big thing in his stable. Having said that, Freddie Roach thinks Crawford’s style is a bad match-up for Pacman. And if they wanted to fight Bud in the first place, we would be watching Pac-Bud on November 5. Didn’t Crawford supposedly win the Pacquiao audition by beating Viktor Postol earlier this year?Which brings us back to Lomachenko. Arum says weight will be the least of problems. Well Lomachenko thinks otherwise. Now if only Loma realizes that being offered an aging Pacquiao may not just be the biggest purse of his career but his best shot at superstardom.