Analyzing an Apex Predator: 3 Techniques Patrick Cote Will Use to Upset Donald Cerrone 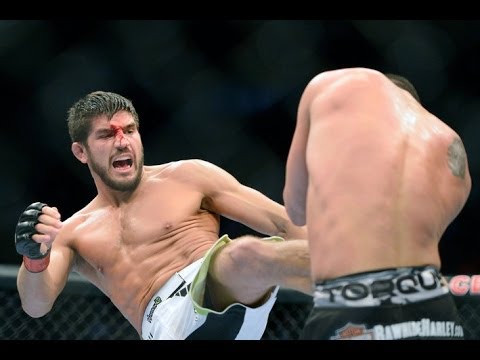 The Cowboy meets the Predator this Saturday, June 18th as Donald Cerrone and Patrick Cote square off in the UFC Fight Night 89 co-main event. The match-up pits two veterans in a violent clash of striking styles. Though both men are aggressive off their backs – Cote used a slick arm-bar sweep to turn the tables on 10th Planet ace Ben Saunders in their recent contest, and Cerrone has submitted 16 opponents in his lengthy career – the real intrigue will be seeing how these two fare on the feet.

Though they come from different backgrounds, both men are talented strikers, which makes this a tough fight to pick. Ring Odds has the line:

Cote is a slight underdog, but he’s a live one. He’d make an excellent addition to a low-pressure parlay. Play Cote with Macdonald for a promising all-Canadian bet slip.

In this breakdown, I outline the strategy and two main attacks Cote will use to upset Cerrone in their welterweight tilt this Saturday night in Ottawa. I give special attention to Cote’s recent fight against main eventer Stephen Thompson and provide plenty of home-cut visual aids.

Let’s get into the technical stuff.

Kicking at the Edge of Range

Cote generally starts his fights the same way, setting up just outside effective punching range to work feints and make reads. We can see him set up at the cusp of range here, something he did often against Stephen Thompson. 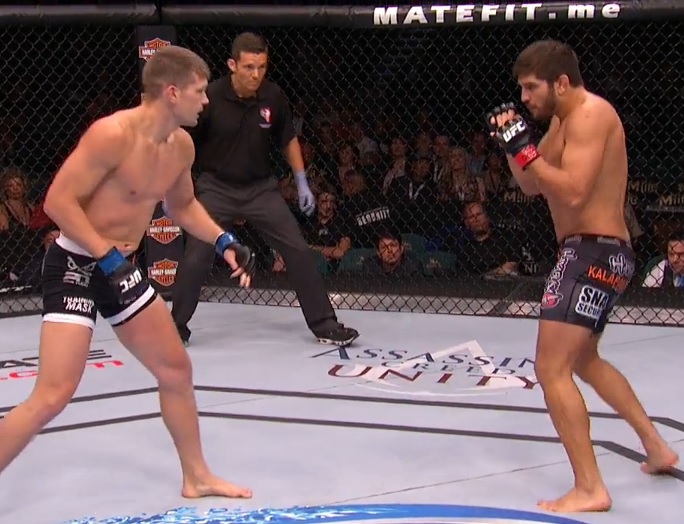 Cote spends a lot of time at this distance trying to get his opponent to over-commit. This range keeps him out of immediate danger against bombers of Thompson’s caliber (it’s how he took Anderson Silva into the third round at UFC 90), and gives opponents time and room to make mistakes. Boiled down to its essence, Cote’s game is about poking his opponent from long range, then charging in with big bombs when they overreach, overstep, or overthink.

From this range, Cote prefers to draw reactions from his opponents using a mélange of kicks: 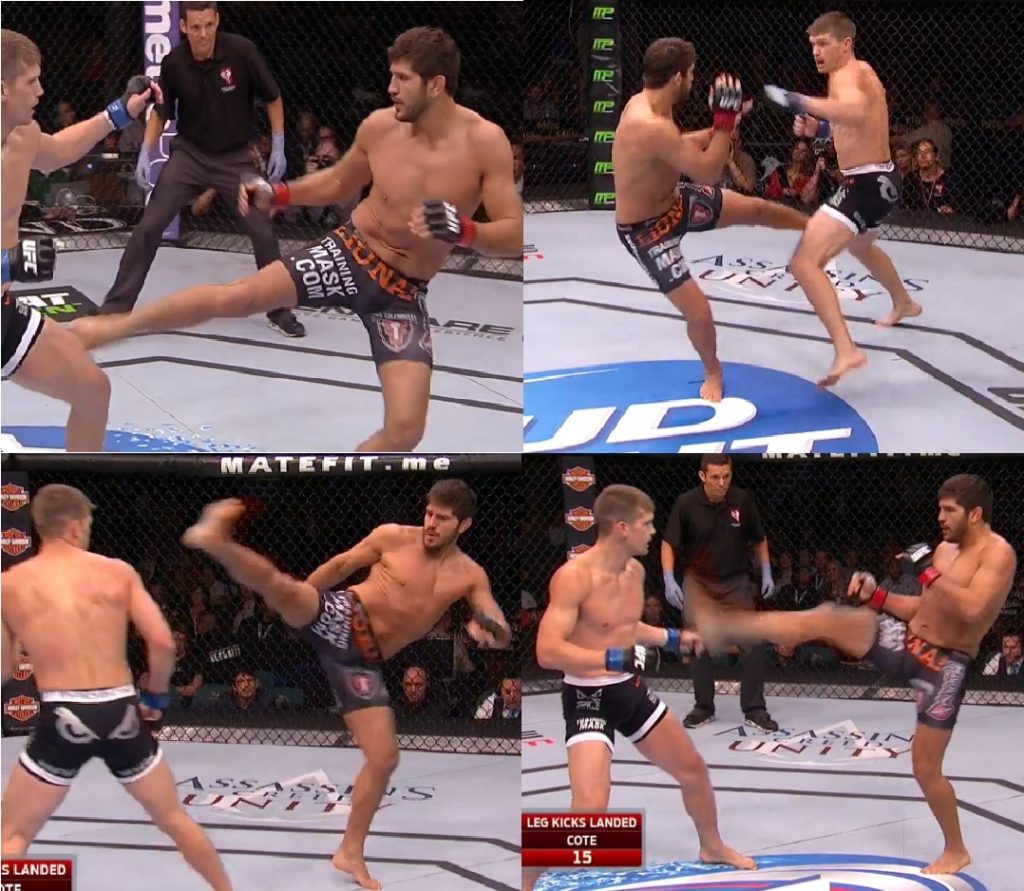 You can see Cote drawing offense from Thompson in Frame 2.

It’s exciting to see Cote draw from a number of different stand-up martial arts. Cote kept Thompson thinking with low roundhouses, question mark kicks, and mae geri. He landed over 15 kicks to Thompson’s legs by the end of round 1.

Against Cerrone, this strategy could be a double-edged sword. Though it will surely open up offensive opportunities, this distance play also gives Donald time to think, something Nate Diaz was wise to rob him of in their UFC 141 firefight. Still, Cote could have success from here by goading Cerrone into range for his two favourite attacks.

Cote likes to work the classic “high-low/low-high” misdirect against his opponents. You’ll often see him feinting a body jab to set up his overhand right, as he does here unsuccessfully against Thompson:

In frame 1, Cote changes levels with his eyes locked on Thompson’s midsection. In frame 2, Cote extends his left arm to sell the body jab and distract from the looping overhand right coming behind it. Thompson evades the punch in frame 3, but Cote isn’t discouraged.

Thompson evades the shot by stepping back with his left leg, creating distance and circling away.

Realizing that Thompson is onto him, Cote decides to set his low-high misdirect up using a slightly different entry. This time, he acts like he’s reaching for Thompson’s leg to set up his power shot:

Cote came closest with this attempt, though Thompson ultimately outclassed him on the feet that night.

Will It Work Against Cerrone?

“Look low, swing high” was ineffective against Thompson, but that doesn’t mean it won’t against Cowboy. “Wonderboy” is a notch above Cerrone where striking credentials are concerned. Cote should have success against Cerrone with this misdirect.

Why am I so confident? I heard it from Cerrone himself…

“I have zero head movement,” Cerrone told UFC.com on Wednesday. He was making a larger point about how fans could expect a high-impact fight, but he was also telling Cote exactly where to find him. Cerrone has an upright kickboxing stance, and when coupled with his lack of head movement in the pocket, it makes him the perfect target for arcing overhand punches, especially ones set up by smart feints.

I call this Cote attack the “Baroni Blitz” for two reasons. First, it seems like a fitting comparison because Cote and Baroni grew up in the same era of the UFC (surprised? I was). More to the point, Cote’s attack looks a lot like the blitz of straight punches Phil Baroni used to crumple Dave Menne at UFC 39:

Cote uses something like the “Baroni Blitz” when his opponents overextend from long range. His goal is to close distance as quickly as possible, and to land as many punches as he can during the tiny window of opportunity he’s created with his probing kicks.

Cote’s blitz probably developed in a karate dojo. You can see the aspects he’s borrowed here against Ben Saunders at UFC Fight Night 81:

Cote attempted the same blitz against Thompson after feeding him kicks from long range:

The angle here is better; you can see the way Cote charges in, stepping up and “shifting” with his right foot (in this case, only to parallel), then driving behind more stepping straight punches.

Will It Work Against Cerrone?

Cote had some success against Thompson, and used this blitz to set up the finish against Saunders. It’s a high-percentage move for him that plays perfectly into his long-range strategy.

Expect Cote to charge in with this blitz after Donald kicks from range. Cerrone was open down the middle against Nate Diaz’s advancing straight punches, and may be vulnerable to the same attack angle here.

Cote is the bigger man, and the two attacks outlined here exploit some of the drawbacks of Cerrone’s guard and upright style. Cote eats some kicks from long range, but inflicts big damage on the feet on Saturday night. Expect clinching against the cage, top control on the ground, and the striking attacks outlined here as Cote hammers his way to a unanimous decision win.

You can find links to all of my breakdowns, training tips, and fight blogs by following @macrea on Twitter. I hope this article helps inform your training, betting, or bar talk this Saturday night. Thanks for reading.