Confident or Stupid? A breakdown of Cris “Cyborg” Justino vs Leslie Smith 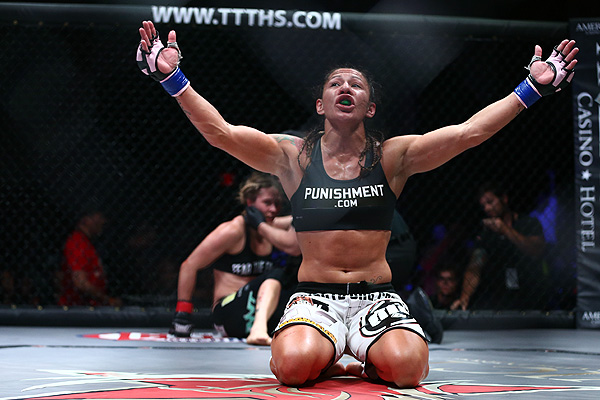 Since the very beginning of women’s MMA, Cris ”Cyborg” Justino has been regarded as the scariest and most aggressive female on the planet. Her blitzkrieg offense and violent striking intent have been enough to score 13 out of her 15 wins by knockout and prove that she is one of the scariest women on the planet. Cyborg is currently a brown belt under Andre Galvao and has competed against the best strikers on the planet in Muay Thai and kickboxing matches making her one of the most well-rounded females athletes to date.

Currently, the UFC only has two women’s divisions, which are at 115 pounds and 135 pounds. Justino competes regularly at 145 pounds which is a division that Dana White has repeatedly said doesn’t have enough talent to form in the UFC quite yet. Cyborg herself has also said in the past that she can’t make 135 pounds and wouldn’t be willing to try now that the use of IV’s has been prohibited. Her nutritionist, however, seems to defer, stating The MMA Hour that he believes with enough time, not only can she make the weight class of 135 pounds, but he can also get her back up to her walking weight of around 168 pounds by fight time without an IV.

For her first bout inside the premier organization for Mixed Martial Arts, it seems that Cyborg is moving her weight downward slowly over time, fighting at a catch weight of 140 lbs. If all this is true and she will eventually be able to make 135 lbs. the entire women’s bantamweight division is about to get turned on its head.

But not if Leslie Smith can help it, Leslie Smith is going to be the first test inside the UFC for Cris “Cyborg” Justino. Although considered the underdog, if she is able to take the luster out of the widely believed “most dangerous women on the planet” in her first bout with the UFC, she will have defied the odds and done something no one else has been able to do since Cyborgs first fight in 2005 (which is the only MMA fight she has ever lost).Leslie “The Peacemaker” Smith is the woman who nearly had her ear punched off at UFC 180 against Jessica Eye. She’s 8-6-1 after her last win over Rin Nakai at UFC Fight Night: Hunt vs Mir where she won a unanimous decision on the Brisbane, Australia fight card. She’s a blue belt in Brazilian Jiu-Jitsu under Caesar Gracie and Alessandro Ferreira and has 4 wins by knockout and 4 by decision.

Leslie “The Peacemaker” Smith is the woman who nearly had her ear punched off at UFC 180 against Jessica Eye. She’s 8-6-1 after her last win over Rin Nakai at UFC Fight Night: Hunt vs Mir where she won a unanimous decision on the Brisbane, Australia fight card. She’s a blue belt in Brazilian Jiu-Jitsu under Caesar Gracie and Alessandro Ferreira and has 4 wins by knockout and 4 by decision.

It’s true that on paper this doesn’t look good for The Peacemaker, who has competed as low as 125 in the past and is coming up to the catch weight of 140 to meet Cyborg at UFC 198. But it’s not all about what’s on the paper. This will be a rough weight cut for Cyborg going lower than she ever has and it could result in her energy dropping off in the fight.

In Cyborg’s most recent loss, she fought in a Muay Thai bout against ISKA World Welterweight Champion Jorina Baars. It’s not an MMA bout but it’s the best we have in assessing Cyborg’s weaknesses.

The Dutch Champion, Baars, was able to point out a few weaknesses that if exploited correctly, could mean an upset victory for Leslie Smith at UFC 198.

Firstly, Baars was able to strike moving backward and was able to hurt Cyborg early with a front kick to the face as Baars was backed up against the ropes. If there is anything fight fans know to be certain, it’s that Cyborg is going to rush forward looking violent haymakers to end the fight early. If Leslie Smith can throw damaging blows as she moves backward right before she takes an angle to not get caught on the cage, there’s a chance that she could stop the brutal onslaught of Cris Justinos aggression and turn the tide.

Secondly, vicious leg kicks. Jorina was able to slow Cyborgs forward momentum down quite a bit by landed vicious inside and outside leg kicks between Cyborg’s forward blitzes. As the fight went on her leg was feeling more and more damage and as a result, she wasn’t able to close the distance as quickly as she needed to surprise Baars. On top of striking while moving backward, landing quality leg kicks could give Leslie Smith the time she needs to circle away from the devastating right hand of Cyborg.

Thirdly, controlling the center of the octagon. Once Jorina was able to stop the powerful forward pressure of Cyborg, she wasn’t afraid to step in and control the center of the ring. This allowed for the space she needed to land those leg kicks and knees to the face that dropped Justino along with the boxing combinations that sealed her victory.

Although Cyborg is widely known as the scariest women on the planet and her career of female domination is well documented, there are flaws in every athlete. If Leslie Smith can exploit those flaws, we might be in for the greatest upset in the history of Women’s MMA.