This Saturday, June 4th, Former WEC Featherweight Champ Urijah Faber(33w-8) takes on current UFC Bantamweight Champion Dominick Cruz(21w-1) in the co-main event in Los Angeles. This will be the deciding fight in their trilogy, and looks to be an exciting one.

These two fighters have a much publicized rivalry dating back almost ten years. Dominick Cruz’s sole loss on his record comes at the hands of Uriah Faber when he challenged him for the WEC Featherweight belt in 2007. “The California Kid” was able to submit Cruz with a mounted guillotine early in the first round. Leading up to that fight and following it there was some animosity between the two that continued to grow.

Faber went on to defend the Featherweight Title three more times after facing Cruz, before losing his belt to Mike Brown in 2008. Cruz made the move up to Bantamweight and won the WEC Bantamweight Title, and defended it until the UFC purchased the WEC.

Faber eventually faced Cruz again, this time for the UFC Bantamweight title, which Cruz maintained going in to the UFC. Prior to this fight, the competitive spirit grew in to general dislike between the two fighters. After five rounds, Cruz won the decision, using his elusive movement and a few well timed takedowns to take the win in the judges eyes.

After one more successful title defense, Cruz was forced to vacate the title due to several knee surgeries and an almost 4 year layoff. Cruz returned in 2014, and in January of 2016 defeated TJ Dillishaw, a former protege of Faber, for the Bantamweight Title.

There has been plenty of buildup to this fight, and it seems both fighters will be looking to settle a longtime score in the octagon. 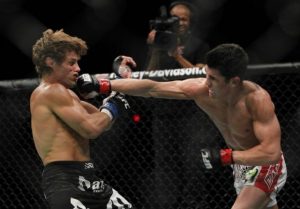 Urijah Faber is an MMA veteran, with 41 professional fights under his belt, compared to Dominick Cruz’s 22. Despite this, Cruz has shown some brilliance with his striking, and his incredible defense and elusive footwork. While Faber has a somewhat more standard approach, Cruz’s style is very unorthodox and hard to classify. Dominick Cruz has the clear advantage in movement and hand speed. He leads with his head, with his hands down, but is able to slip and dodge most strikes and find odd angles for his attacks. The flicking jab, lead hook, and rear uppercut were the most successful weapons for Cruz in the second fight against Faber. Dominick Cruz showed very little vulnerability in his fight against Dillishaw, only taking damage when against the cage really.

Faber is likely the more powerful striker, he dropped Cruz twice in their second fight, and has 9 KO’s to his credit. Faber’s best chance in the standup battle is to attack the legs of Cruz and take away his movement. Otherwise, he’ll need to back Cruz into the fence, or risk swinging at air all night. 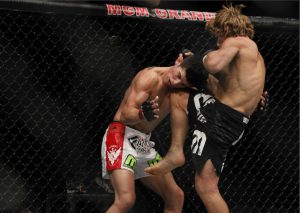 Both fighters have a background in wrestling, while Faber is a former NCAA Division 1 competitor. Cruz has a blue belt in Brazilian Jiu Jitsu, while Faber holds a brown belt. On paper, it seems that Faber would be far superior to Cruz on the ground, but Dominick Cruz has demonstrated great wrestling skills in the cage. Urijah Faber has 19 submission wins in his career, and has a significant ground and pound game. In their first matchup, Faber submitted Cruz fairly quickly, but will likely find it harder to get a grip on the much improved Champion.

In their second matchup, it was Cruz who took down Faber multiple times. In this fight, expect Faber to press the action and try to get the fight to the ground and work from top position whenever he can. He may try to throw multiple kicks in the hopes that Cruz takes him down, simply to negate some of the movement and work in close.

Based on his wrestling background and Brazilian Jiu Jitsu ranking, I’d have to give a clear grappling advantage to Urijah Faber.

The Bantamweight division is 135 lbs, and its fighters are not know for having trouble with endurance. However, the style of Dominick Cruz is incredibly movement heavy, full of feints and fakes and slips. As the fight wears on, his endurance may suffer, especially it becomes a grappling heavy fight. The heart of both fighters seems strong, both fought tooth and nail in their second match till the last bell. Faber has the longer career by far, and has definitely taken more damage than Cruz, but it’s hard to say if that will be a factor. Based on the intense output of the fighting style of Dominick Cruz, I’d give the edge to Faber if it goes into later rounds.

The odds are heavy against Urijah Faber, so that’s why I’m picking him. It’s a long shot, but the chance is there, and the payoff sweet. He beat him once, maybe he can do it again.

I pick Urijah Faber to win by TKO via ground and pound in Round 3.