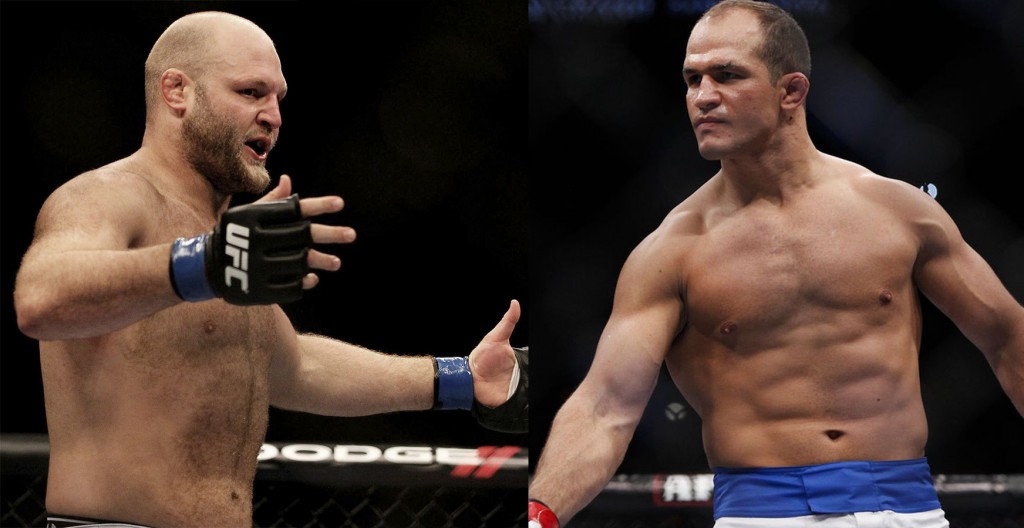 This weekend’s UFC Fight Night in Zagreb, Croatia features Heavyweights #4 ranked Ben Rothwell squaring up with #5 Former Heavyweight Champ Junior “Cigano” Dos Santos. Both fighters are motivated and looking to make their case for a title shot. Junior Dos Santos is the slight favorite coming into this fight, while Ben Rothwell is riding a four fight win streak.

Junior Dos Santos is coming off of a second round TKO loss in his long awaited bout with Alistair Overeem in December. Dos Santos came into that fight returning from a one year layoff , following a Fight of the Night win in a bloody battle against Stipe Miocic. Dos Santos holds a record of 17-4, wth only 3 losses since entering the UFC. Two of those losses are to former champion Cain Valasquez, and his most recent to #3 ranked heavyweight Alistair Overeem.

Ben Rothwell comes into this matchup with four consecutive wins under his belt , all by submission or KO/TKO. Rothwell has had mixed success since entering the UFC in 2009, however with an overall MMA record of 36-9 he is by far the more experienced fighter. With his latest submission win over veteran Josh Barnett, Rothwell has propelled himself into title contention. After a 45 professional fights,Ben Rothwell feels that it is his time, and he has made it known that his goal is nothing less than the UFC Heavyweight Title.

Junior Dos Santos is by far the more talented and technical striker. His crisp boxing combinations are his bread and butter. Look for him to work the jab early on against Rothwell. His quick jab and cross to the body, as well as the swiping left hook to the body will try to wear down the heavier fighter. Dos Santos’s famous stepping overhand right is what won him the title against Cain Valasquez. Look for him to set it up off the jab-cross combo and breaks from the clinch. Rear uppercuts, chopping rights,  and wheel kicks have worked for him in the past as well. Junior does find himself open in exchanges, especially firing off body shots. Expect Rothwell to look to counter strike. Rothwell will have the weight advantage in any clinch exchanges, and against the cage as well.

Ben Rothwell is a patient and methodical opponent, with absolute knockout power. Even a glancing blow from the big man is capable of putting his opponents down, as seen in his bout with Alistair Overeem. Rothwell has deceptively good defensive skills on the feet, and great head movement for a heavyweight fighter. Rothwell began his training with Militech Fighting Systems and Duke Roufus, so he is no slouch in the striking department. With such power in his hands though, Ben only needs to land a few shots to end the fight. He tends to lean his weight onto his back leg when in the pocket, and keeps a rear uppercut chambered and ready. His stance does leave some openings to the body which Dos Santos will likely try to capitalize on.

Both men are accomplished grapplers, but it is likely the majority of the fight will take place standing. Junior Dos Santos has excellent takedown defense, and is a Brazilian Jiu Jitsu Black Belt. Ben Rothwell holds the rank of Purple Belt in BJJ, but holds a submission victory over Josh Barnett a highly skilled catch-wrestler with impeccable grappling credentials. Rothwell typically weighs in around the 260 lb mark, while Dos Santos typically comes in around 238 lbs. A twenty pound weight difference in a grappling exchange is significant, especially against the cage. Look for Rothwell to try his famous Gogo choke from the clinch, or if Dos Santos tries for a takedown. With an 80% takedown defense rate, we haven’t seen Junior work off of his back much. The danger for Dos Santos is always when he is backed against the cage, and Ben Rothwell will likely capitalize upon that.

Both men have been in some serious wars inside the cage over the years. Both men have shown that they have the grit to continue the fight, even when on the losing end. Junior Dos Santos’s battles with Cain Valasquez are well documented. Ben Rothwell’s loss to Mark Hunt was via decision, when he took overwhelming damage and continued to push forward. Ben Rothwell has an iron chin and has demonstrated it time and again. While Junior Dos Santos has tasted Championship fame, Big Ben Rothwell is still working to see his title hopes come to fruition. This determination could be a deciding factor in a drawn out, grinding fight.

Junior Dos Santos has displayed absolute striking mastery in past bouts, but has taken some significant damage since then. His skill level in boxing is among the best in the UFC. When he is on point with his timing and distance, Ben Rothwell likely cannot match him in the striking department. With that said, Ben Rothwell can change the fight with one shot and is a great counter puncher. I expect Dos Santos will attack the body early and try to wear down his opponent. If the fight goes to later rounds expect Big Ben to wear down first. If it turns into a slugfest, I expect Big Ben to come out on top.

It’s a contest of speed and technique vs power and durability.