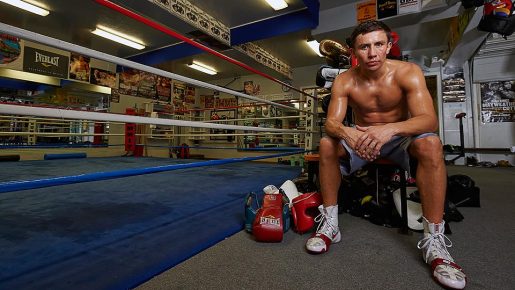 Gennady Golovkin has left a trail of destruction in boxing’s middleweight division. As of the latest body count, the Kazakh god of war has left 31 of 34 opponents as KO victims. That 91.2% KO rate is the highest in boxing’s rich middleweight history and with each KO grows the legend of GGG.

Golovkin has been so dominant that he’s knocked out 21 consecutive opponents and counting. His latest KO victim was then IBF Middleweight champion David Lemieux, a man himself who possessed hands of stone. But like the 33 other before him, Lemieux became just a post script in a story that has captured the imagination of boxing fans all over the world.

Not only boxing fans are starting to notice Glolovkin, the corporate world has discovered this boxing marvel:

Golovkin is the third boxer ever to sign a deal with the exclusive Jordan Brand, Roy Jones Jr. and Andre Ward are the other two. The Jordan deal not only validates GGG’s status as one of the best boxers of present time, it also symbolises his crossover to the mainstream market.

Four years ago, Golovkin traveled to the U.S. in the hopes of boxing fame and glory. The son of a coal miner and a Korean laboratory assistant, Glolovkin grew up in the streets of Kazakhstan with his three brothers. Two of them, Vadim and Sergey joined the military. Unfortunately both died before Gennady turned 14. His brothers’ deaths toughened him and made him and his twin brother Max take up boxing seriously. That dedication led Gennady to a spot in his country’s Olympic team and in 2008, Glolovkin captured the silver medal at the 2008 Summer Olympics. Since turning pro, Golovkin has destroyed everything in his path. On Saturday April 23rd, another challenger will try to avoid the fate of those before him:

To be not part of the Gennady Golovkin Greatest Hits compilation is much easier said than done.

Dominic Wade, the undefeated 26 year old challenger from Washington DC, has been bestowed the IBF mandatory challenger status against Golovkin. Though most say he has a gargantuan task in front of him, he didn’t sound unfazed when he spoke to Ring TV in February:

“They making it seem like he’s Superman. I don’t really think that much. I see flaws in his game. I think he’s just basic up and down. But the hype is scaring [people]. I don’t think he’s quick. All I think he has is his strength. Other than that he’s basic and it isn’t a style that I haven’t seen.”

Golovkin may not be as quick as a Mayweather, yes, but he punches like a god. And what makes it difficult for his opponents to survive, much more win against him is the fact that he is a master of cutting off the ring and limiting his opponent’s breathing space. Without real estate, opponents are forced to defend against his punches instead of launching their own offense. And even when they are able to touch him, Golovkin has a granite chin that is considered as one of the hardest in modern boxing. The man has never been knocked down in 375 fights, both  as an amateur and a professional. Although that has not been statistically proven, it’s a myth that makes him even more godly.

Dominic Wade has beaten all 18 opponents he’s faced, knocking out 12. But although he says Glolovkin’s “basic” style is something he hasn’t seen before, he may be in for the shock of his life. For one, Wade is virtually untested, having fought fringe contenders thru 18 bouts. But isn’t that “untested” issue the supposed weak spot in Glolovkin’s arsenal?

Golovkin has defended the WBA version of the title 15 times, counting from the time he was “regular” champion up to present where he is the body’s “super” champion. Along the way, he’s annexed the Ring, IBO, interim WBC and IBF middleweight titles too. But despite the impressive run, Glolovkin’s resume doesn’t have a legit big name in it, save for pseudo stars like Matthew Macklin, Curtis Stevens, Daniel Geale, Marco Antonio Rubio, Martin Murray and David Lemieux. But Golovkin isn’t all to blame for this. Big name fighters avoid him like a plague. 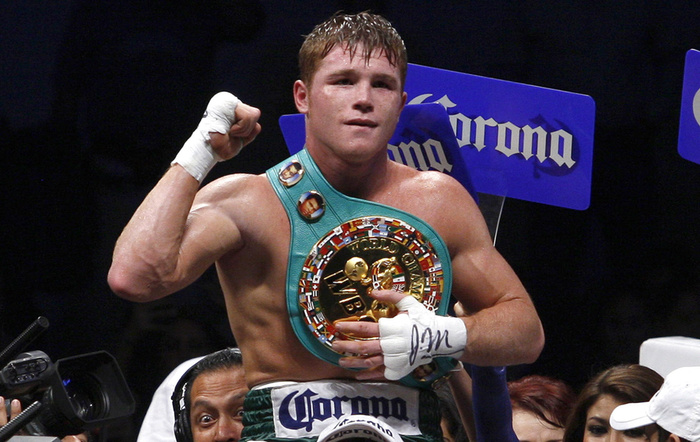 WBC middleweight champion Saul “Canelo” Alvarez is one big example. After beating Miguel Cotto last year, he was supposed to defend the title against GGG. Instead, Alvarez refused ( and continues to refuse) to fight at the middleweight limit of 160 pounds and has insisted on fighting Golovkin only at 155 pounds. Both camps tried to negotiate but when it appeared they were headed for a stalemate, the WBC allowed both fighters to take one more fight before forcing them to the negotiating table again. That’s why Canelo is fighting Amir Khan on May 7 and Golovkin is fighting Wade on Saturday. It remains to be seen whether the two will really fight later this year but first things first. Each must pass their immediate next assignments. 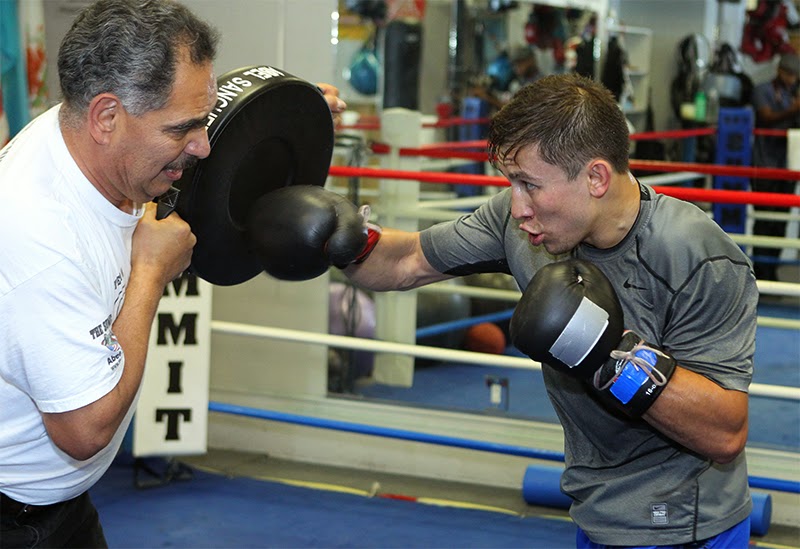 “Dominic presents a challenge because he’s young, hungry and undefeated. We haven’t any changes in training camp because I train my fighters to be the best they can be. They have to adapt to us, we’re not going to adapt to them. Gennady works hard, he will have sparred 70-75 rounds by the end of camp, a similar amount to what he’s sparred for the last 5-6 fights.”

Golovkin and Sanchez aren’t taking Wade lightly. They know one mistake and everything will be gone. Unless he’s fighting a big name like Canelo, each fight is high risk and low reward for GGG. One mistake from now on and going forward, the Golovkin’s journey to the apex could be halted.

So which will it be? Will Wade derail the Kazakh freight train? Or will Gennady Golovkin march on to fulfil his dream of unifying the middleweight titles?