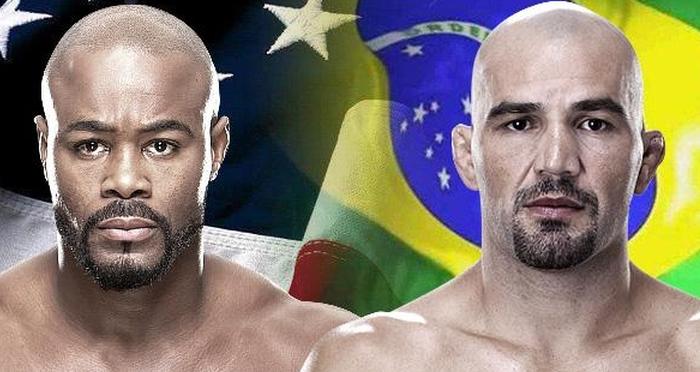 Former UFC Light Heavyweight Champion Rashad Evans takes on Glover Teixeira in the main event this Saturday April 15th in Tampa, Florida. Evans (#7 rank LHW) is coming off of a recent loss after a two year layoff, while Teixeira( #4 rank LHW) has won his last two. Both men have tried and lost against Former Light Heavyweight Champion Jon Jones, and both are now looking to make another run at the 205 division championship. Glover Teixeira is a slight favorite

Rashad Evans(19w-4-1draw) got his start in the UFC by winning the Ultimate Fighter Season 2 in 2005. After moving down to Light Heavyweight, the former Michigan State wrestler went undefeated en route to take the belt from Forrest Griffin in 2008. Evans lost the belt to Lyoto Machida by knockout, but then went on to win his next four fights. Evans then lost a decision to former training partner Jon Jones for the Light Heavyweight belt in 2012, and has since gone 2-2 in the octagon.
Evans looked a little flat against Ryan Bader in October of last year. Prior to his recent bout with Ryan Bader, Rashad was out for two years with various injuries.

Glover Teixeira(24w-4-0draw) has his finished his last two opponents, earning a TKO over Patrick Cummins in November and a submission victory over Ovince Saint Preux in August.
Prior to that he suffered back to back decision losses against Jon Jones and Phil Davis. Prior to challenging Jones for the title, Glover had won 19 straight. Teixeira put in a dominant performance against Patrick Cummins, but still shows some weaknesses to takedowns. Both of Teixeira’s losses in the UFC have come against dominant wrestlers.

Rashad Evans’s striking is slick and unpredictable. Before co-founding the Blackzililans fight team that he trains with in Boca Raton, Florida Evans was a longtime member of Greg Jackson’s gym in Albuquerque, New Mexico. His boxing is top notch, and he utilizes many unorthodox techniques that are characteristic of Jackson’s fighters. His flicking jab in close is often used to set up the follow up right hand. Rashad Evans has a wide arsenal of attacks: leg kicks, head kicks, great boxing combinations, coupled with excellent footwork and movement. And speed. Rashad absolutely has the speed advantage in this fight. While we haven’t seen the one punch power that away Chuck Liddell at UFC 88, he still has it. Rashad will most likely try to tire the larger fighter out early with jabs and quick body shots, while trying to frustrate Teixeira’s timing. Rashad’s best weapons are his speed, elusive footwork, and crisp boxing, especially in the clinch. Defensively Rashad is able to fend off most, however he has tended to play it safe in recent striking battles.

Glover Teixeira has one punch knockout power in both hands. The Brazilian is famously a huge fan of Mike Tyson, and on occasion employs that ‘peek-a-boo’ style setting up his vicious left hook. Glover has a very solid jab and good head movement behind it. He put his boxing on display in his TKO stoppage of Patrick Cummins in November. The straight right followed by the left hook and right uppercut are often in his arsenal. Expect Teixeira to be a bit conservative with his kicks to avoid being taken down by Rashad. Teixeira’s powerful boxing style sometimes leaves him open to counters. I expect Teixeira to simply try to stalk Evans down and try corner him to put him away with punches.

While Rashad Evans has amazing skill in the striking department, I’d have to give the edge to Teixeira.

Both men hold Black Belts in Brazilian Jiu Jitsu, and Rashad Evans has years of high school and college wrestling behind him as well. Glover Teixeira has shown some vulnerability to wrestlers in past fights. He was completely dominated on the ground by Phil Davis in their fight, and Patrick Cummins was able to take him down several times in their fight as well. Rashad Evans was able to outwrestle Phil Davis to a decision victory in their matchup, and will most likely look to impose his wrestling on Glover Teixeira.
Teixeira for his part has demonstrated a very solid top game, and powerful ground and pound attacks.
Look for Rashad Evans to try to wear down the larger fighter with his his wrestling and pressure against the cage.

Heart, Chin, and Endurance
Both men come into this fight with almost dead even records. Rashad has only one loss by KO or stoppage to Lyoto Machida, while Glover’s last loss by stoppage was his first fight in 2002.
I expect Rashad Evans to have a slight edge in endurance, however I give the chin advantage to Glover.

While both men have incredible skill sets, Rashad Evans seems to be the more complete fighter. Glover Teixeira does incredible damage, but eats quite a few shots also. Rashad Evans looked to have some ring rust in his last fight against Ryan Bader. What Teixeira lacks in technique, he makes up with power and determination; however I think Rashad Evans holds the upper hand by being able to fight an unpredictable and more fluid fight.

It comes down to how Glover can handle the wrestling and varied attacks of Rashad Evans, and how aggressive Evans is with his striking. If he’s willing to stand and trade with Teixeira, things could get crazy. (Like when Evans KO’d Chuck Liddell)

I pick Glover Teixeira to win the by TKO in Round 2.