Time For Canelo Alvarez To Deliver 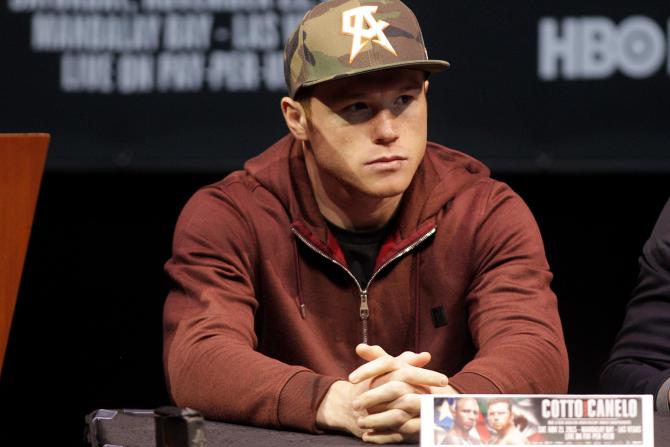 Gennady Golovkin has done his part of the deal. It’s time for Canelo Alvarez to deliver his share of the agreement.

It's over! Gennady Golovkin knocks out Dominic Wade in the 2nd round. Golovkin stays undefeated, improving to 35-0. pic.twitter.com/ulp6zIAfbM

After his 2nd round destruction of Dominic Wade at the Forum of Inglewood, California on Saturday night, Gennady Golovkin not only notched his 22nd consecutive win by knockout, it also improved his knockout ratio to 91.4%. That KO rate is the highest in boxing’s middleweight championship history. With the victory, Golovkin also recorded his 16th consecutive middleweight title defense, leaving him just four off the record set by Bernard Hopkins. With those accomplishments, Golovkin further solidified his claim as the best middleweight in the planet, despite the fact that two of the most prestigious belts aren’t wrapped around his waist right now. Those belts belong to Saul “Canelo” Alvarez, the man who Golovkin called out after the fight and the man whom he is supposed to face next, if a deal can be made at all.

The WBC World Middleweight Champion @Canelo deep in camp ahead of May 7's Title defence #CaneloKhanhttps://t.co/ip5uPkdQD1

Saul “Canelo” Alvarez owns the WBC version of the middleweight titles. Known as the green belt, it’s considered as the most prestigious of boxing jewels. Aside from the WBC belt, Alvarez also is the Ring and Lineal Middleweight champion. In boxing, the lineal title is literally “the man who beat the man” title. In Alvarez’s case, he defeated Miguel Cotto last year to win the WBC and Lineal titles which Cotto won in June 2014 against a battle scarred Sergio Martinez. Martinez was the staple middleweight for the longest of time but after a series of injuries, he was but a shell of himself when he fought Cotto at a catchweight of 159 pounds. When Alvarez beat Cotto, the pair also fought at a catchweight of 155 pounds although the bout was for the middleweight titles.

I never step in the ring without @everlast_ pic.twitter.com/gmgn3iZpOe

Aside from Everest, Canelo Alvarez doesn’t step inside the ring without a catchweight. Since fighting Floyd Mayweather Jr. at a catchweight of 152 pounds in September 2013, Canelo Alvarez has fought exclusively at 155 pounds. Alvarez’s victory over Alfredo Angulo, Erislandy Lara, James Kirkland and Cotto were all fought at the 155 catchweight now known as Canelo-weight. The reason is that 155 doesn’t belong to a boxing weight class: It’s one pound over the Light Middleweight limit and it’s five pounds below the middleweight limit. Alvarez’s next fight on May 7 will be against Amir Khan and once again, it will be fought at the 155 pound catchweight.Why Alvarez loves to fight there is his prerogative, but in doing so, he defeats the purpose of boxing’s weight classes and cheats the world boxing titles which he carries along with him.

Breaking: @Canelo will face @AmirKingKhan on May 7 on @HBOboxing PPV. Shocker. 155 weight. #boxing

Before Canelo Alvarez won the middleweight title from Miguel  Cotto, the WBC already sent marching orders for the winner of that bout to face Golovkin next. After Alvarez won, negotiations began but never prospered mainly because Alvarez refused to set the fight at the middleweight limit of 160 pounds. Alvarez insisted on fighting at 155 while Golovkin argued that the bout had to be fought at 160, the middleweight division’s stipulated weight limit. When it became clear that both camps would be headed to a stalemate, the WBC allowed each fighter to take a voluntary fight  before resuming negotiations. Alvarez immediately dropped the bomb by choosing Khan, a very popular former 140 pound champion struggling to make big fights at 147. Left with no choice, Golovkin faced Wade who was his mandatory challenger for the IBF title which he won from David Lemieux in his most recent bout. Now Golovkin has done his part, it remains to be seen whether Alvarez will do hi,

“I’m not a #Middleweight." Said #Canelo Alvarez the WBC Middleweight Champion when asked about a potential… https://t.co/6Z47Nqxu4B

Such was Alvarez’s proclamation when asked about the potential clash with Golovkin. He spoke about not giving any leverage to his opponent and talked about being the A-side of the negotiations. Sure, Alvarez is the bigger name and the more marketable star than Golovkin, but the middleweight title isn’t just about the money. It’s about boxing. For a long time, the middleweight division title was one of the most revered titles in the sport. In the past, the middleweight division saw four legendary fighters take on each other, one after the other, without thinking about losing. Sugar Ray Leonard, Marvin Hagler, Roberto Duran and Thomas Hearns were the division’s four horsemen who took boxing to new heights with their series of bouts. These boxing legends defined the middleweight division, now Alvarez is putting it in shame not only by insisting to fight at 155 but choosing Khan, an oversized light welterweight who’s never fought above 147 in his career.

“It doesn’t matter who wins. Just give me my belt. I need my belt. I’m ready, guys.”

Ready indeed is Golovkin, ready to fight anybody at 160 pounds. Now it’s Cannel’s turn to step up to the plate and deliver. We can say what we want on the Amir Khan bout. It is what it is now and that must happen. What happens next after that is up to Canelo. Alvarez’s promoter, Oscar De La Hoya, insists that the Canelo-Golovkin bout will happen because it must happen. However, this delay we’re experiencing is what he calls “marinating” the bout in order for it to become bigger than what it will be right now. Such may not be what Golovkin has in mind. He’s 34 years old and won’t be in this same destructive form a couple of years from now. The world doesn’t want to see both do what Mayweather and Pacquiao did to their bout- fight each other at the tail end of their careers. Canehlo-Golovkin must happen now or it won’t be as important. Golovkin wants to be the undisputed middleweight title. He only needs Canelo’s belts and the WBO version owned by Bill Joe Saunders. Saunders was also linked to a bout with Golovkin, but like Alvarez he turned it down. It’s understandable why both don’t want to fight Golovkin. He’s low reward and high risk. But this is boxing and like the four horsemen of the 70’s, it’s not about not losing. It’s about giving the fans and the sport what they deserve.

So after making him the multimillionaire that he is right now, Will Canelo return the favor to the fans and the sport, and deliver what they want? Or will he continue to hardball Golovkin until he grows tired or grows too old? It’s time for Canelo to step up. Beat Khan then fight Golovkin at 160. Heck, you can fight at 155 if you want, but let GGG fight you at 160. Otherwise, hand over those middleweight belts. They deserve respect and what you’re doing is an insult to Leonard, Hagler, Duran, Hearns and the sport of boxing.