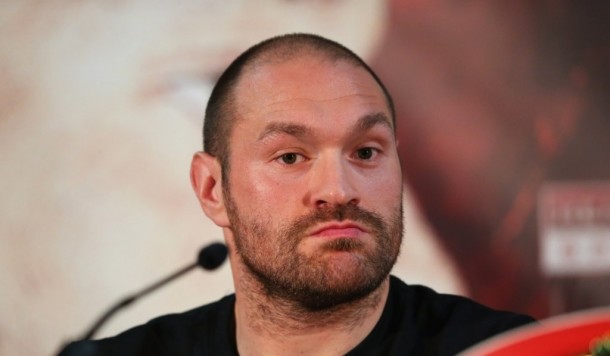 Tyson Fury’s gotten into some kind of trouble in the past week. First he pulled out of the Klitschko rematch a second time then reports of him testing positive for cocaine surfaced.

So how does boxing’s heavyweight champion respond to all the negative things that have been happening to him? In the Tyson Fury manner:

Tony Montana is a fictional drug kingpin in Brian De Palma’s movie Scarface and is one of the most popular movie characters of all-time. The role was played by actor Al Pacino who got a lot of acclaim for his portrayal of the iconic drug boss.

Tyson Fury’s tweet was captioned “Tyson Montana” in obvious reference to Pacino’s movie character. Fury’s image is also copied from one of the more memorable scenes in the movie. Fury offered no explanation for the cryptic tweet and you guess is as good as ours. Is he mocking the reports of the failed drug test ? Or is he owning up to the accusations ? Only Tyson Fury knows what he meant. What’s certain though is that Fury may be about to lose the heavyweight titles he worked all his life to win.

Fury won the WBA, WBO, IBF, IBO, Ring and Lineal heavyweight titles when he upset Klitschko in November 2015. Since then, Fury’s lost the IBF belt because he refused to defend it against his mandatory challenger. With the pull-out from the rematch and the failed drug test, he could lose the remaining straps as well.

On Friday, the WBA issued a statement regarding Fury and it said:

“The Committee of Champions will consider Fury’s case to make a decision. Regarding the VADA report, they sent a statement in which they inform that the result was positive. Now we are waiting to see if Fury’s team will request the opening of the B sample test.”

For his part, WBO President Paco Valcárcel said his organisation is on a wait and see phase right now.  Said Valcarcel:

“We have to wait for the British board to notify us of the information they have got regarding the doping tests. We don’t want to go any further until we receive the medical certification and the results.”

Whether Fury’s camp requests for the testing of Sample B is a big question.  But this is the second time a drug issue has surfaced after Fury pulled out of his rematch with Klitschko. After their July 9 bout was cancelled, the UK Anti-Doping Agency charged Fury and his cousin Hughie with a doping violation, saying both tested positive for Nandrolone. Both have denied the accusations and a hearing is scheduled in November. On October 1, ESPN reported that Tyson Fury tested positive for cocaine in a random urine test conducted by VADA. Fury and Klitschko had agreed to undergo VADA testing for their rematch and in Fury’s samples submitted on Sepember 22, the heavyweight champion tested positive for benzoylecgonine, the chief compound found in cocaine.

ESPN further said it got a copy of the letter sent by VADA President Dr. Margaret Goodman to the parties involved. The letter supposedly read:

“This letter is to advise you that the ‘A’ sample urine specimen number 4006253 collected from Tyson Fury on September 22, 2016 in Lancaster, England through his participation in the Voluntary Anti-Doping Association (VADA) program has been analyzed for anabolic agents, diuretics, beta-2 agonists, stimulants and drugs of abuse. The results of the analysis are as follows: Adverse. Urine specimen contains benzoylecgonine.”

To date, Fury nor his management team have commented on the report. What’s interesting is that Fury withdrew from the Klitschko fight the day after the said VADA test was conducted. However, promoter Mick Hennessy cited Fury’s health as the reason for the pull out claiming his fighter was “medically unfit” to compete.

Since the second fall out of their rematch, Wladimir Klitschko has been trying to negotiate a bout with IBF Heavyweight champion Anthony Joshua. Although no deal for that bout has been signed or agreed upon, both parties have shown genuine interest in making it happen. In fact, a November 26 date has been initially pegged should it materialise. Before Klitschko came to the picture, Joshua was linked to a bout with Joseph Parker.

While Joshua’s eventual plan was to fight Klitschko, this new opportunity comes at least two fights ahead of their original itinerary. Said Joshua promoter Eddie Hearn:

“It’s one or two fights before plan, but it’s here. He’s (AJ) so relaxed, he’ll fight anyone. It’s a huge fight. It’ll be the biggest fight in British boxing history. I’m nervous; the gulf in experience is so wide. It’s a classic cross roads fight: the hottest prospect in boxing versus a living legend.”

It will be a blockbuster indeed and perhaps even bigger better than Fury-Klitschko 2. Whether it gets done though remains to be seen. As for Fury, it’s uncertain what his next move is. It’s even a riddle if he’ll ever put on those boxing gloves again. But who knows? Only Tyson Montana knows.