This is the main event of a stacked card featuring some of Brazil’s most popular fighters.
Anderson Silva, Vitor Belfort, Jacare Souza, ‘Shogun’ Rua, Demian Maia, Antonio Nogueira, and the recently signed Cris Cyborg all have fights scattered through the event.
It might be one worth watching in its entirety.

Werdum is the betting favorite.

A highly decorated Brazilian Jiu Jitsu Black Belt, Fabricio Werdum began his MMA career in 2002 and has had stints in the former Pride and Strikeforce organizations as well as the UFC. Fabricio Werdum (20w-5-1) put his stamp on the MMA world in 2010, by stopping the seemingly invincible Fedor Emilianenko, widely considered a contender for best fighter of all time, via triangle choke in the first round.

Werdum has been on a tear since his return to the UFC in 2012. He has gone 6-0 since then, most recently defeating Cain Valasquez by guillotine choke to claim the title. Interestingly, Werdum was getting the better part of the striking battle before Valasquez went for the takedown and ultimately was submitted. “Vai Cavalo” still has plenty of momentum as he looks to defend his title.

Stipe Miocic (14w-2) is a rising star in the UFC’s Heavyweight division. His recent victories over Andrei Arlovski and Mark Hunt have propelled him into the limelight and title contention. Prior to that he fought a 5 round war with former champ Junior Dos Santos, losing by unanimous decision in a Fight of the Night performance.
A former NCAA Division 1 wrestler, Miocic started his MMA career in 2010 and made his UFC debut in 2011. 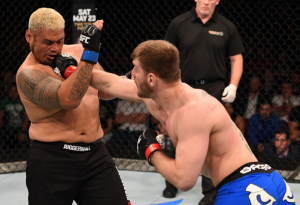 Fabricio Werdum’s work with striking coach Rafael Cordeiro has taken his striking skills to another level in recent years. While renowned as a submission artist, in his early career Werdum had trouble dealing with elite strikers with good takedown defense.

Werdum showcased his improvements in his dominant performance over Travis Browne in 2014, putting together intricate combinations coupled with excellent defense en route to his unanimous decision victory. He then finished Mark Hunt with punches after a spectacular flying knee, to win the Interim HeavyweightTitle.
Fabricio Werdum has a patient and varied striking game, and will utilize his long jab and crisp combinations to keep his opponent on the outside and break him down. Heavy leg kicks, body kicks and the occasional wheel kick are in his arsenal, and he will mix these in as well.

Werdum has shown some vulnerabilities to good boxers in the past, however, especially at close range.

Stipe Miocic has heavy hands, and a very slick MMA-Boxing style. He finished veteran Andrei Arlovski in the first round, and set a UFC record landing 361 strikes against Mark Hunt before a 5th round TKO. Miocic has great head movement and likes to go to the body often to wear his opponent down and set up head shots. He will double up on the jab to get inside, and land 3 and 4 punch combinations on his way out. Miocic is also a patient striker, and will often land a volume of strikes until he sees an opening for a power shot. Boxing will be his approach on the feet most likely, with leg kicks and clinch work mixed in here and there.

While Miocic is certainly the better boxer, Werdum has proven that he can stand with the elite strikers of the division. His wealth of experience against high level competition, along with his dominance of former champion Cain Valasquez give him the edge. 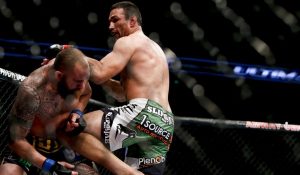 Fabricio Werdum holds the edge here almost across the board. While Miocic is a former NCAA wrestler, and has some catch wrestling training as well, it pales in comparison to the grappling resume of Werdum. 10 of Werdum’s 26 wins come by submission, and he is known for his excellent guard and ability to avoid damage on the ground. In addition to his ability to attack from his back, Werdum has great control from the top and will initiate ground and pound attacks from there as well.

Stipe Miocic has shown great wrestling and the ability to control fights when they go to the ground. However, he has yet to go to the mat with a grappler of the caliber of Fabricio Werdum.
It is possible that Miocic’s ground game is underrated, but Werdum’s is not. 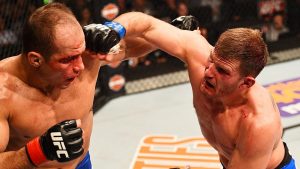 Both men have been stopped only once in their careers, Miocic by Stefan Struve, and Werdum by Junior Dos Santos. Werdum has had the longer career, and likely has absorbed the most cumulative damage, while Miocic has absorbed relatively little aside from his war with Junior Dos Santos. Werdum is 4-0 in 5 round fights, while Miocic is 1-1 in a 5 round contest.

Endurance will likely not be a factor until the later rounds, neither men have been known to tire or under-train.

The fight will be in Brazil, Werdum’s home country, which is a sizable advantage.

I give the edge to Miocic for his aggression and his ability to absorb damage while continuing to press forward.

Overall, I think Werdum has the upper hand. While I wouldn’t count Miocic out for the upset, Fabricio Werdum has all the tools and accumulated experience to retain his title for some time.
If Miocic mounts a significant striking offense against him, expect Werdum to take the fight to the ground and finish it there.

Barring Werdum getting rocked or one punch KO’d , I see a dominant performance from the Heavyweight Champion.

I pick Fabricio Werdum to win by submission in the second round.