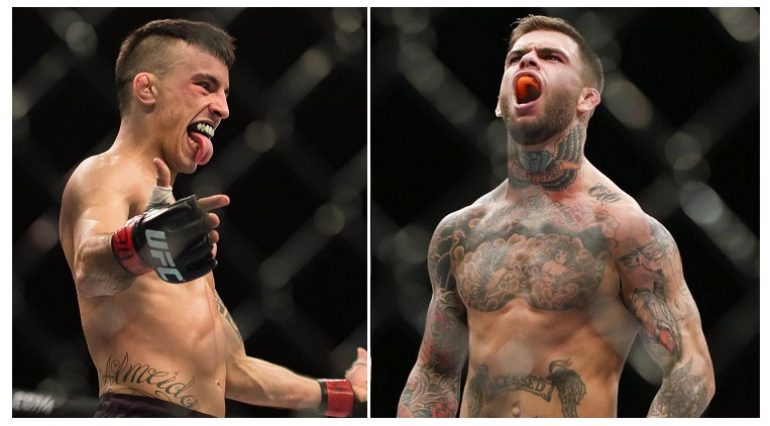 This Sunday, May 29, UFC FIght Night’s Main Event will feature two undefeated Bantamweight fighters looking to move up the ladder towards the Championship belt.

Thomas Almeida (21-0, Ranked #7) will take on Cody “No Love” Garbrandt (8-0) in what should be an exciting matchup. Both fighters have won the majority of their fights by knockout, and I expect they both want to continue that trend.

Almeida -165 vs Garbrandt +145
Almeida is the betting favorite.

On paper, Thomas Almeida is the more experienced fighter, with a 21-0 MMA record. Cody Garbrandt’s 8-0 MMA record pales in comparison, until you factor in his 32-1 amateur boxing record. This will be Garbrandt’s 4th fight in the UFC, and Almeida’s 5th. Both fighters are carrying the confidence of an undefeated record into the octagon. For Almeida, a win could put him into the top 5 and a fight or two away from a title shot. For Garbrandt, a win would put him into the rankings by beating a top ten fighter, and build his popularity in the UFC. 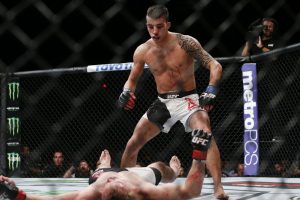 Thomas Almeida is a Muay Thai striker and trains at the famed Chute Box Academy in Sao Paulo, Brazil. Chute Box is known for spawning fighters such as Wanderlei Silva, Shogun Rua, and Cris “Cyborg Santos”. Powerful Thai Clinch work is a staple of Chute Box fighters, and Almeida is no different. His attacks are varied, with a mix of classic Muay Thai and the bobs, weaves, and slips of boxing. Thomas Almeida is a patient and technical fighter with knockout power in his hands and feet. A long jab and stepping elbows allow him to get inside and throw combinations, and he will go the Thai Clinch in close quarters.
Almeida has shown some weaknesses to boxers, in his fight with Brad Pickett he was on the receiving end of several boxing combinations before he was able to finish the fight.

Cory Garbrandt will utilize all of his striking weapons in MMA, but he is primarily a boxer. He likes to use his hands, and has confidence in his ability to finish fighters with his punches. Barbrandt trains with Team Alpha Male, home of notable fighters Urijah Faber, Danny Castillo, and Paige Van Zant. 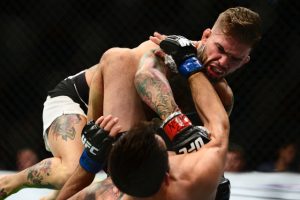 Garbrandt’s footwork is great, and he throws smooth and varied combinations. He is great at slipping punches, and has a vicious left hook. Inside leg kicks and the occasional head kick will keep his opponent guessing while he works his boxing.

He does carry his hands low at times, leaving openings for the stepping elbows of Almeida.

Both fighters are known for being finishers, so one punch or knee could end the fight. I’d still give the striking edge to Almeida.

Almeida is a Brown Belt in Brazilian Jiu Jitsu, but prefers to keep the fight standing. While he holds three submission wins from his early MMA career, we haven’t seen him use much of his jiu jitsu in the Octagon. He attempted a heel hook against Brad Pickett when he was in danger, but only to return to his feet. Expect Almeida only to go to the ground if he is losing the exchanges standing.

Garbrandt has a background in wrestling, but also likes to keep the fight standing. He is a freestyle wrestler with good takedowns, and has finished some fights with ground and pound attacks. Training at Team Alpha Male should give Garbrandt a well rounded approach to ground fighting, and the knowledge to defend against the BJJ attacks of Almeida.

While Almeida holds a Brown Belt in BJJ, Chute Box fighters are not known for their submissions. If the fight goes to the ground, Garbrandt will likely be the one to take it there. I think the varied MMA style of Team Alpha Male will give Garbrandt the edge in close quarters. 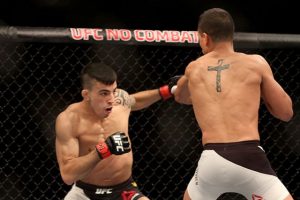 Both fighters are 24 years old with relatively fresh MMA careers, so expect them both to have plenty of fuel to put into the fight. Endurance should not be a factor as both fighters seem to be in great shape physically.

With undefeated records, neither fighter seems to have a weakened chin, however Almeida was dropped twice by Pickett in their matchup. With that in mind, I give the edge to Garbrandt. 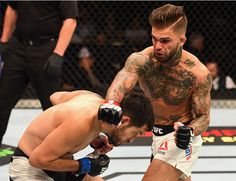 This should be an exciting fight. Both guys seem eager to make their mark, and will likely go toe to toe in the octagon in search of a highlight finish. It’s hard to pick a winner, because it seems weaknesses aren’t really apparent until you see a fighter lose. I’ll stick with the odds, and pick Almeida to hand Garbrandt his first loss.

I pick Thomas Almeida to win by TKO in the first round.