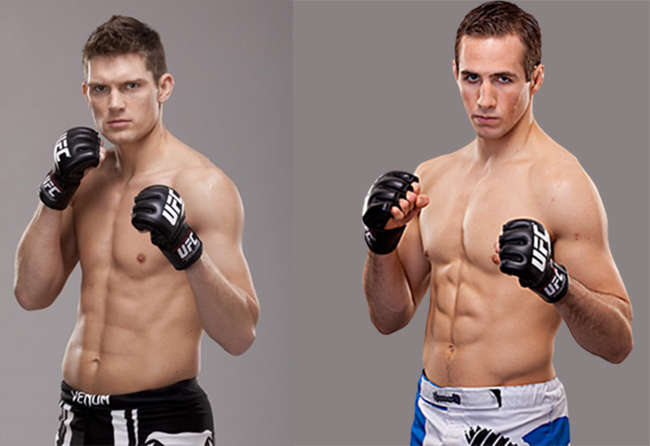 Saturday, June 18th, #1 ranked Rory “The Red King” Macdonald takes on #2 ranked Stephen “Wonderboy” Thompson to determine who gets the next shot at the Welterweight Championship.

This fight is as close as it gets, no favorites here.

These two fighters have been on a collision course for some time, although they both have a history of friendship, as well as being former training partners. Thompson did some training at Tristar Gym with Georges St. Pierre and Rory Macdonald years ago before getting into mixed martial arts. Both fighters agree that their friendship will not be affected by this matchup, and are approaching the situation as professional fighters. 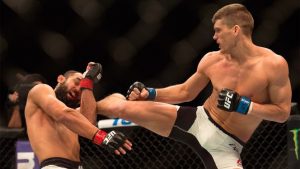 Stephen Thompson comes into this one off of a TKO and Performance of the Night victory over former UFC Welterweight Champion Johnny “Big Rig” Hendricks. Thompson dominated the standup battle, and was able to avoid the takedown attempt of Hendricks, finishing him in the first round. “Wonderboy” entered the UFC as a veteran kickboxer, compiling an incredible 57-0 record in the sport. His sole loss in his career is to UFC veteran Matt Brown, who was able to take him to the ground and expose his inexperience as a grappler.

These guys have trained together, and know each other’s skill set, so it should be an interesting and exciting fight. The winner gets to challenge the winner of Robbie Lawler and Tyron Woodley for the Welterweight Championship.

Stephen Thompson holds black belts in American Kickboxing and Tetsushin Ryu Kempo Karate, and has been practicing karate under his father, Ray Thompson, since he was 3 years old. He has an elite striking game built around his karate style, characterized by his sideways stance and unorthodox attacks. He can fight from either stance, and favors a lead sidekick to the body to keep his opponents at bay, and unloading with a karate blitz combination of punches and kicks. He has shown some vulnerabilities fighting in close quarters, and prefers to keep the fight on the outside. Thompson has 7 knockouts to his credit in MMA, and can absolutely finish the fight on his feet. 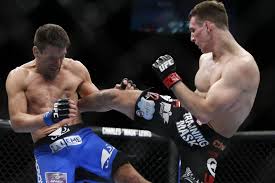 Rory Macdonald has trained in mixed martial arts since age 14, and it shows in his ability. He has trained at Tristar Gym with Firas Zahabi, and was a longtime training partner to former Welterweight Champion Georges St. Pierre. Macdonald’s striking style is much more of the Muay Thai/Boxing variety, but Firas Zahabi is known for training unpredictable fighters. He also prefers to keep the fight on the outside and use his range to put together combinations. Rory uses his crisp jab and left hook, along with spectacular headkicks to pick his opponents apart. Macdonald also showed his ability to put together nice combinations of hooks, knees and elbows on the inside in his most recent fight with Robbie Lawler.

Thompson will want to keep the fight at a distance, and use his range and try to land his signature kicks and catch Macdonald flat footed. Macdonald’s strategy may be to try to put Thompson against the fence and wear him down.

Rory Macdonald is a Black Belt in No-gi Brazilian Jiu Jitsu under David Lea, and has 6 submissions to his credit. In addition to his Brazilian Jiu Jitsu training, Rory has spent many years under the tutelage of Firas Zahabi and Georges St. Pierre, training his wrestling in addition to BJJ. He has good takedowns, and great takedown defense. He will likely take the fight to the ground if he runs into difficulty in the standup. Macdonald is likely training heavily on bodylocks against the cage, and double leg takedowns in preparation for this fight. 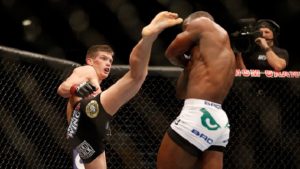 “Wonderboy” Thompson is a Black Belt in Japanese Jiu Jitsu, and a Purple Belt in Brazilian Jiu under Carlos Machado, who is also his brother-in-law. Thompson, however, has shown some major deficiencies in his ground game, which is not surprising considering his long career in kickboxing. In his fight against Matt Brown, he was absolutely dominated on the ground in the third round. He offered very little in the way of defending the takedowns, had his guard passed multiple times, and was on the receiving end of ground and pound attacks. Granted, that was four years ago, but Thompson will most likely want to keep the fight standing. It has been reported that Thompson has done some training with former UFC Middleweight Champ Chris Weidman to build his wrestling skills, so we will see. 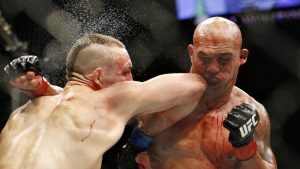 Stephen Thompson has only faced serious adversity in the octagon once against Matt Brown, and lost via decision. While it was a grueling battle, the wrestling aspect of the fight clearly fatigued Thompson and broke his will. Thompson’s style is very movement heavy, and he has struggled a bit with endurance in the second and third rounds.
Rory Macdonald has had no problems with endurance or heart. He has been in some absolute wars, twice with Robbie Lawler, and also with Carlos Condit. I do not see conditioning being a factor for Macdonald in this fight, but this will be his first time in the octagon after his epic battle with Lawler, so we’ll see if that has had any affect on him. Given the heart and grit he showed in his last fight, the advantage is clearly with Rory Macdonald.

Overall I think this is a great matchup, and should be an exciting fight. I think Thompson may move ahead in the striking battle early on, but Macdonald will find his rhythm and turn the tide. Firas Zahabi has also done work with Thompson, and has likely devised some strategies for Macdonald to counter his Karate base. I believe Thompson’s only chance at victory is to finish Rory early in the fight.

I pick Rory Macdonald to win by TKO or Submission in the third round.