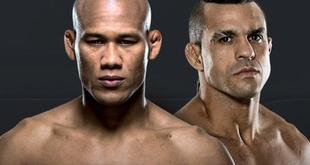 Jacare went 5-0 in the octagon before losing a split decision to Yoel Romero in his last outing. With Yoel Romero on a banned substance suspension, Jacare moves up to the #2 spot and is looking towards a shot at the title. 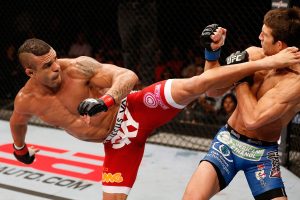 Vitor Belfort is a legend in the sport of MMA. His first UFC fight was back in 1997 at UFC 12 when he won the Heavyweight Tournament at the age of 19. Belfort briefly held the UFC Light Heavyweight Championship, after defeating Randy Couture by TKO in 2004 . Belfort has fought for the UFC, PRIDE, Affliction, and Strikeforce in his 20 year MMA career. “The Phenom” has competed as a Heavyweight, Light Heavyweight, and now Middleweight and has a total of 36 professional fights. Belfort is on his third run at the Middeweight Title, having previously challenged former champions Anderson Silva and Chris Weidman. Belfort’s knockout of Dan Henderson proved that he is still a competitor, and still very much in the race.

Vitor Belfort has a ferocious standup game. He holds highlight reel knockouts over Dan Henderson, Michael Bisping, Rich Franklin, Wanderlei Silva, and Luke Rockhold. Vitor Belfort rose in the ranks initially due to his MMA boxing skills and ground and pound. In more recent years he has added a top level arsenal of kicks to his game, with great success. Wheel kicks, Muay Thai Round Kicks and body kicks coupled with his already deadly hands have made Vitor Belfort into a well rounded and respected striker.

Vitor Belfort’s striking defense and footwork are at a fairly high level, while his attacks seem to rely on power and explosiveness rather than precision and accuracy. He has great boxing combinations, and very fluid movement inside the octagon. Look for him to start slow and feel out his opponent, and then swarm with power punches if he finds an opening or stuns Jacare.

Jacare Souza has started to put together a decent striking game in recent years to complement his extensive ground game. He will switch between orthodox and southpaw stances, and will throw kicks to the body and legs often without fear of being taken down. Jacare favors the straight right, and likes to use it to close distance and fight from the clinch. Souza does train with Team Nogueira and Black House MMA, so he has training partners such as Anderson Silva to continue to help him improve his striking game.

While Souza will certainly stand and exchange with Vitor Belfort, I imagine he will be simply waiting for an opportunity to take the fight to the mat. 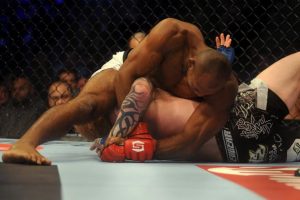 Both men are Brazilian Jiu Jitsu Black Belts, but Jacare is widely recognized as the better submission artist. 16 of his 22 wins come by submission, compared to Belfort’s 3. True, Belfort often uses his jiu-jitsu as a supplement for his striking, but he has not shown the overall grappling mastery that Jacare has in the cage.

Jacare Souza’s top game is crushing, he will flow into dominant positions searching for submissions, all the while dropping elbows and punches from the top. If he winds up on the bottom, Jacare has incredibly fast submissions, and will flow through a sequence of them until he has success or gets a sweep.

Vitor Belfort has great ground and pound control, and vicious power. If he manages to hurt Souza in the standup, it is possible he try to finish the fight on the ground with strikes. It is highly likely that if Vitor Belfort gets taken to the canvas, he will find himself at a big disadvantage.

For those who don’t remember, Vitor Belfort was at the center of the TRT (Testosterone Replacement Therapy) controversy prior to his match with former Middleweight Champ Chris Weidman. That Belfort was on Testosterone Therapy during that time is well do 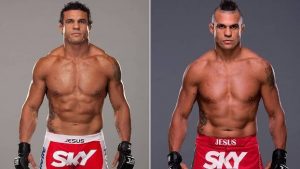 cumented, however, speculation has been that Vitor may have had some extra supplements at various points through his career.

Of course this takes nothing from his incredible skills as a mixed martial artist, but heart, chin, and endurance are all given a nice boost from TRT.
“Post TRT” Vitor is just as skilled and dangerous, but may not have the staying power and ability to take a shot as he did before.
I would give the edge here to Jacare based on this alone.

Vitor Belfort is a great fighter, and an absolute legend. However, I think he has made his last title run, and Jacare Souza will be the better fighter this Saturday in Brazil. I don’t expect Vitor to be a pushover, and it should be an exciting fight.

I predict Jacare Souza to win by head and arm triangle in Round 2.